I’m delighted that TAIL SPIN, a spec feature script I recently rewrote and represented at AFM in November gained some awesome coverage on Spec Scout this week where three industry readers assessed it as being above the level of professional spec scripts in Hollywood, worthy of inclusion in their monthly “top submissions” list, and worthy of consideration by industry buyers. 🙂 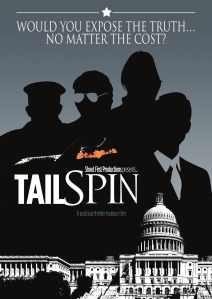 One reader commented: “Tail Spin” is a tense, emotionally engaging political thriller that exceeds the expectations that its solid premise creates. With its professional-level craft and economical, quick-witted dialogue, the narrative is a delight to read… The protagonist and his chief ally are easy to root for, with clear character arcs… The narrative has the potential to be a satisfying, timely addition to its genre.

Another: “Tail Spin” has a premise that properly sums up the global implications of the story while also summarizing the personal connection of the protagonist to the events. Both of these elements mark the premise as being highly cinematic. The structure is solid… The character work is a complete success, as the protagonist is quite atypical of what one might expect the main character of a political thriller to be. This atypical characterization leads to some surprisingly comedic moments within dialogue [which] help to elevate the tone to something unique, as the balance between comedy and humor is well thought out and executed… A series of constant escalations in regards to the conspiracy makes the pacing feel appropriately constructed. The logic is solid and immersive.