(*If you’re a litigious Fox executive and you’re reading this, then this comment is made in jest. If you’re a friend or family member: “It’s true! It’s bloody true!!”)

As my eagle-eyed former Unitec screenwriting student, Sam Brooks posted on his facebook page, Jennifer Garner’s production company has been given a put pilot commitment by Fox for a TV series about male stripping – The Whole Shebang. (A put pilot being a pilot that the network is obliged to air or face financial penalties).

While none of the articles, like the ones at The Wrap, Deadline Hollywood, or Variety  specifically say that Garner will be starring, one assumes this is likely the case.

Jennifer Garner who MAY play the lead in The Whole Shebang

But here’s the thing: We made this show in New Zealand over 10 years ago! It was called The Strip, it was made by The Gibson Group, and it was devised by yours truly.

I mean, our lead actress, the wonderful Luanne Gordon (see below) even looks like Garner!

(I shouldn’t be too unkind: we gave women the vote in 1893 and it took America another 27 years to catch up there, so maybe they’re closing in on us… just like they are in the America’s Cup – arghhhh! But I digress…) 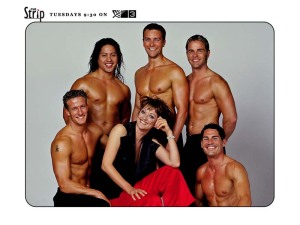 Luanne Gordon and strippers: The Strip

The one-hour drama revolves around a newly single soccer mom who inherits a rundown male strip club and unexpectedly finds herself at the center of a dysfunctional, makeshift family that helps her take charge of her life.

Here’s the synopsis (edited) taken from The Strip‘s home page – Melissa is a top corporate lawyer in her mid-thirties… whose life is turned upside down when her husband leaves her for his gym trainer.

Through the emotional turmoil that follows, Melissa wonders where it all went wrong… Looking for solace, she heads to a “Hen Night…” There, with a male strip-o-gram doing his thing, she has an epiphany and decides… [she’s]  going to get out of the corporate rat race and set-up the country’s classiest male strip club!

[She decides to buy a former client’s] sleazy establishment – transforming it from a hang-out for the raincoat brigade – to the Germaine Greer of strip clubs.

The series follows Melissa as she tries to balance her new role as a male strip club proprietor, with the demands placed on her as a mother, daughter, friend and lover.

hashtag – deja vu anyone? (Oh, sorry – One’s a working mom; the other is a soccer mom…)

And I happen to know for a fact that the company with the US TV right actually pitched The Strip to Fox back in 2009. Apparently they initially  “thought it sounded great” but later decided it “wasn’t for them.” Hmmmmm…. (hashtag – spooky coincidence…)